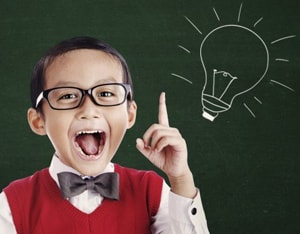 A born naturalist (“She even collected owl pellets. And she took them apart”), Kimmy eagerly shares her knowledge about dinosaurs and fossils on a trip to the museum—until she’s silenced by classmate Jake’s disparaging remark that “girls aren’t scientists.” No sooner does her perspicacious teacher spot her sudden change, though, than he leads her to a specimen of Gasparinisauria, a dinosaur named, she reads, in honor of paleontologist Zulma Nélida Brandoni de Gasparini. Even Jake admits that that is “awesome,” and for the rest of the visit Kimmy becomes a positive fount of information about raptor toes, Stegosaurus brains, and other dinosaur lore. “When I grow up,” Kimmy declares, “I want to be just like her.” Mr. Tiffin’s “I think you already are,” cements the teachable moment. Kimmy, her teacher, and Jake are white, but along with capturing his characters’ changing moods and responses with artfully angled faces and other body language, Karas portrays the rest of the class with diverse features and skin tones. A gallery of women paleontologists of the past and present makes an apt closer.