You must login to see this content. Login.
Home  »  Reading Practice in English   »   The Hare & the Tortoise – Learn English with Fairy Tales 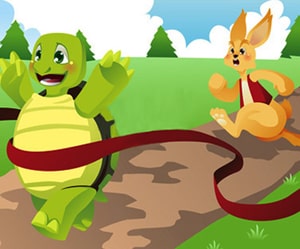 The Hare & the Tortoise

The Hare & the Tortoise

A Hare was making fun of the Tortoise one day for being so slow.

“Do you ever get anywhere?” he asked with a mocking laugh.

“Yes,” replied the Tortoise, “and I get there sooner than you think. I’ll run you a race and prove it.”

The Hare was much amused at the idea of running a race with the Tortoise, but for the fun of the thing he agreed. So the Fox, who had consented to act as judge, marked the distance and started the runners off.

The Hare was soon far out of sight, and to make the Tortoise feel very deeply how ridiculous it was for him to try a race with a Hare, he lay down beside the course to take a nap until the Tortoise should catch up.

The Tortoise meanwhile kept going slowly but steadily, and, after a time, passed the place where the Hare was sleeping. But the Hare slept on very peacefully; and when at last he did wake up, the Tortoise was near the goal. The Hare now ran his swiftest, but he could not overtake the Tortoise in time.

There once was a speedy hare who bragged about how fast he could run. Tired of hearing him boast, Slow and Steady, the tortoise, challenged him to a race. All the animals in the forest gathered to watch.

Hare ran down the road for a while and then paused to rest. He looked back at Slow and Steady and cried out, “How do you expect to win this race when you are walking along at your slow, slow pace?”

Hare stretched himself out alongside the road and fell asleep, thinking, “There is plenty of time to relax.”

Slow and Steady walked and walked. He never, ever stopped until he came to the finish line.

The animals who were watching cheered so loudly for Tortoise, they woke up Hare.

Hare stretched and yawned and began to run again, but it was too late. Tortoise was over the line.

After that, Hare always reminded himself, “Don’t brag about your lightning pace, for Slow and Steady won the race!”

The race is not always to the swift.

Slow and steady wins the race.