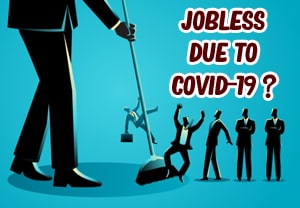 The last few months have been more chaotic than the entire last decade. Many jokes have arisen on the Internet about how 2020 has felt like two decades in the span of one year with the number of global events that have occurred. While there have certainly been a large number of notable events, the Covid-19 pandemic is the largest.

Millions of people around the world have either been laid off or furloughed until later notice, yet despite the pandemic going on for months, hiring is slowed to record levels. This seems to indicate that the worst is not over. If you have been caught up in this disruption and lost your job, rest assured knowing that there are millions in your shoes. Now is the time to act and take the steps needed to launch a new and exciting career.

Let’s be honest. Not everybody is working in their dream job. In fact, very few people are willing to boast about their job. You may have lost your career due to this pandemic, but are you feeling dejected because you enjoyed your job or because you lost a stable source of income? For most, it’s likely the latter. There’s nothing wrong with being in a career for the salary, but you weren’t ever going to feel passionate about your work that way.

Think back on the tasks you were assigned day to day and if they captured your interest or not. If you had been in your career for decades, you were likely in a more traditional job. Unfortunately, traditional jobs are disappearing at a quick rate in favor of automation and technology. Therefore, it may be for the best that you got out when you did.

Hiring may have slowed for the moment, but when it picks up it will gain speed quickly. Use this as the time to develop new skills and enter a dynamic career path such as data science. The most important thing is recognizing your personality and interests, and then finding a career path that meets both of those.

After evaluating your career, you may have determined that the career you had wasn’t right for you. If so, congratulations. You now have limitless options in front of you. Years ago, switching career paths was extremely difficult after graduating from a source of higher education. The skills you had were what you used and there was no way to acquire any more skills.

Now, however, trade schools have emerged in an online format that anyone can attend. Unlike colleges or universities, trade schools feature specialized courses that prepare students for a specific career path. Career Karma lists some of the highest-rated trade schools around the country that offer courses ranging from web design to software engineering.

Another great aspect of trade schools is the option to defer tuition for some and take classes online. This makes them a great option for someone who just lost their job and may not have the funds to pay for the tuition yet. Alternatively, shorter tech bootcamps exist that can teach you similar skills for a lower cost. Regardless of your source of education, picking up new skills is a must.

Pick Up a New Skill

On the topic of picking up new skills, you may be wondering which skills are the most useful to learn after losing your job due to Covid-19. The answer is simple: coding or programming. Without a doubt, these are two of the most useful skills for the future of work and learning one or more languages can help you land a job quicker.

Bootcamp Rankings features a number of prominent online coding bootcamps that you can consider attending if you want to upgrade your skills. Coding is used extensively in most tech fields, so picking up this skill can give you an edge over any potential competition you may face in the coming months or years.

The world is in a state of disarray. This doesn’t mean you need to stop moving forward. In fact, this should motivate you to grow and get better. Don’t settle simply because you are now out of work. This is a difficult time for everyone, but what you do next is entirely your choice. Take the steps needed to restart your career by obtaining additional education and learning about the new careers you can enter that will last for years to come.