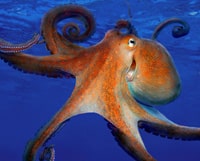 Octopuses have elaborate cardiovascular and nervous systems. Their cardiovascular system includes three hearts; two pump blood to the gills, and a third moves blood throughout the rest of the body. Unlike human blood, octopus blood is copper-based, which makes it appear blue.

The octopus nervous system includes a brain, but two-third of the octopus’s neurons are found throughout its body, especially in its arms. This means the arms have significant local control and sensory capabilities. They may even still reach or grasp after they are severed and their suckers are able to sense chemicals; in other words, smell or taste.

Octopuses are intelligent. Some scientists believe octopus intellect can be found in their ability to use tools and exhibit foresight to retain complex memories, which helps them navigate mazes and solve puzzles, and to use visual cues, which helps them differentiate between human individuals. Octopuses have also been shown to play an activity considered a sign of intelligence.

Most octopus species only live between one and two years. Much of this short life span has to do with the octopus’s reproductive process. When octopuses mate, males may be strangled and eaten by females. Males are often smaller than females. So, they become overpowered and sometimes cannibalized once fertilization is complete.

While females survive the mating process, they die after laying their eggs. Female octopuses guard their eggs for up to eight weeks. During this time, the female’s body self-destructs through cellular suicide until she dies.

Octopus ink is deadly even for the octopus. The ink is a seemingly innocent mixture of mucus and melanin. Melanin, the same dark pigment found in skin, hair and eyes, also happens to contain the chemical compound, Tyrosinase, which can impair a predator’s sight, taste and smell.

Octopuses and other cephalopods may use their ink to distract, confuse and paralyze their predators. This mucus mixture may even block officious gills, causing the fish to suffocate. If an octopus cannot escape its own ink, its respiratory system may be compromised, causing the octopus to suffocate and die.

Octopuses are masters of mimicry and camouflage. They can trigger cells just underneath the surface of their skin to change color. The cells, called Chromatography, contain sacs of pigment that can turn various shades within milliseconds. Some octopuses, such as the common octopus, can also imitate textures. They can warp small segments of their skin, called Papillae, to match textured environments.

Species, like the mimic octopus, are able to not only camouflage themselves but also manipulate the shape of their bodies to impersonate other animals. Their wily mimicry along with many other curious characteristics are just a few reasons why octopuses are captivated creatures of the deep.