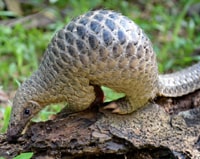 The world’s most trafficked mammal is one you may have never even heard of: the pangolins. Despite its lizard-like appearance, the pangolin is indeed a mammal. Some pangolins are as small as a house cat, while others are as big as a medium-sized dog.

Pangolins are covered in as many as 1,000 scales, which protect them from predators like big cats. When threatened, a pangolin’s natural defense is to curl up into a ball.

Unfortunately, there’s one predator that pangolins aren’t able to protect themselves against; humans. According to some estimates, poachers have hunted more than one million pangolins in the past decade.

Poachers use trafficking routes that span the globe, frequently shifting routes to evade law enforcement. All eight pangolin species, found only in tropical Asia and Sub-Saharan Africa, are now at risk of extinction. Pangolins are killed for a variety of uses, from medicine to luxury goods with the greatest demand in China and Vietnam.

Pangolin scales, often powdered or made into a paste, are prescribed in traditional medicine for everything from relieving arthritis to stimulating lactation. However, these remedies have no scientific basis. In fact, pangolin scales are made of Keratin, the same material found in fingernails.

Pangolin fetuses sometimes consumed in soup are erroneously thought to enhance a man’s virility but only the wealthy can afford to eat a pangolin, which is consumed in parts of Asia to demonstrate social status.

In 2016, SIDES, the International Treaty on Wildlife Trade, voted to ban all commercial trades on pangolins. However, these creatures continue to be poached at an alarming rate even causing a devastating crash in Asian pangolin populations. Recently, poachers have increasingly turned to African species.

The largest confiscation of pangolin scales in 2017, which according to one estimate came from about 20.000 African pangolins. Making prospects worse for pangolin conservation, pangolins face habitat loss plus they reproduce slowly, giving birth to one baby a year.

But why should we care about an animal most people have never heard of? Pangolin dealers are often part of the same worldwide criminal networks that drive other animals, such as elephants and rhinos toward extinction, plus loss of pangolins could prove to be ecological and economic disaster for local communities. Pangolins eat termites that might otherwise destroy crops and buildings. Pangolins also suffer abuses in the wildlife trade, such as force feeding and injuries from snares.

A few lucky pangolins survived being trafficked. Confiscated pangolins in Vietnam, for example, may be sent to a rescue center and returned to the wild. There’s a lot of work to be done to ensure the survival of pangolins. Countries must work to reduce demand and enforce laws against poaching. Otherwise, these gentle creatures may disappear before most people even know they exist.

How to transcribe videos?

3 thoughts on “English Documentary on Pangolins with Flashcards”