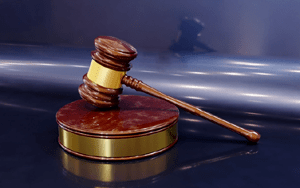 In common law jurisdictions, acquitting someone certifies that the accused is free from the charge of an offense, as far as the criminal law is concerned. This is so even where the prosecution is simply abandoned by the prosecution. The finality of an acquittal is dependent on the jurisdiction.

A defendant is a person accused of committing a crime in criminal prosecution or a person against whom some type of civil relief is being sought in a civil case.

A lawyer who is elected or chosen by local government officials to represent the state government in criminal cases brought in a designated county or judicial district. A DA’s duties typically include reviewing police arrest reports, deciding whether to bring criminal charges against arrested people, and prosecuting criminal cases in court. The DA may also supervise other attorneys, called Deputy District Attorneys or Assistant District Attorneys. In some states, a District Attorney may be called a Prosecuting Attorney, County Attorney, or State’s Attorney.

Exoneration occurs when the conviction for a crime is reversed, either through demonstration of innocence, a flaw in the conviction, or otherwise. Attempts to exonerate convicts are particularly controversial in death penalty cases, especially where new evidence is put forth after the execution has taken place. The transitive verb, “to exonerate” can also mean to informally absolve one from blame.

A felon is a person who has committed a felony. Following conviction of a felony in a court of law, a person may be described as a convicted felon.

Law enforcement is any system by which some members of society act in an organized manner to enforce the law by discovering, deterring, rehabilitating, or punishing people who violate the rules and norms governing that society.

People involved in disputes, whether accidents and injuries, family-related issues, or financial disputes, often rush to judgment and decide to prosecute others. Disputes often can be solved through communication and compromise, while not every dispute involves a legal cause of action. It’s also important to keep in mind that civil suits involve financial compensation, which may or may not solve the underlying dispute.

58 thoughts on “Legal Terms in English for IELTS and TOEFL”