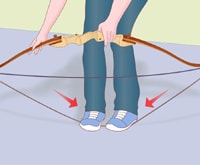 two or more ways to achieve success or a particular task, increasing the likelihood of achieving something through more than one method or way

The salesman had both a real and an online store to sell his products to all potential customers. In other words, he had two strings to his bow to increase the likelihood of running a lucrative business.

Before ye be on wi’ the new.” Of the wisdom of this maxim Mr Slope was ignorant, and accordingly, having written his letter to Mrs Bold, he proceeded to call upon the Signora Neroni. Indeed it was hard to say which was the old love and which was the new, Mr Slope having been smitten with both so nearly at the same time. Perhaps he thought it not amiss to have two strings to his bow. But two strings to Cupid’s bow are always dangerous to him on whose behalf they are to be used. A man should remember that between two stools he may fall to the ground.