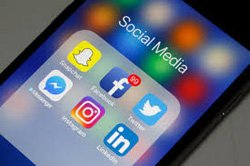 As the lecturer claimed in the video, social media are designed to be addictive. There are attention engineers whom are hired by big companies that borrow principles from gambling machines into the social media to make it highly addictive.

These companies earn profits by catching your attention and consuming fragments of your valuable time. Therefore, addiction plays a key role in their success.

Social media addiction is about spending too much time for visiting Facebook, Instagram, and the like. In fact, this sort of addiction spares a huge amount of time and it interferes with daily activities of people.
I personally believe that people themselves are responsible for any side effect that comes from the usage of social networks. If a person cannot manage his/her time in order to handle his/her stuff during a day, he/she deserves being called social network addicted.
Moreover, I surmise that some people are suffering from different psychological disorders and social network addiction is a clue to those issues. For instance, lack of confidence and self-esteem make people look for social validations. In detail, some people upload their own pictures in social media platforms and develop an insatiable desire for receiving “Like”. Also, some people have a fear of being excluded. In fact, they think if they are not active enough in such platforms, they are overtaken by others. So, as you can see in such examples, people disorders make them addicted to social media and we ought not to put the blame on attention engineers.

Life without the social media seems hard at first glance. But, as time goes on and the person get used to it, there are plenty option of entertainments that can be substituted for the social media. Also, the person who quits the social media would have higher attention focused on his/her work.
The person can still succeed in his/her career, have friends and interact with other parts of the world without any need to having a profound profile in one of those social media.

A double-edged sword has boon and bane at the same time. In my personal life, the minuses never overtake the pluses when it comes to social network. It is better to keep it in our mind that through the usage of social networks, we can;

1) Establish rapport.
2) Find many information about our expertise and expand our horizons.
3) enhance our business reputation.
4) Launch and lead a campaign.

So, why should we close our eyes to such merits?

The victims of social media

In my idea, the victims of social media are those who consider it as an entertainment and let social media to saturate their life.
They are the real addicted ones that do not aware of its influence on their life. Once they quit social media they would realize how much their life would change into a new era.

The way social media impact upon you

As lecturer denoted “social media usually offers shiny treats in exchange for minutes of your intention”. Also he called it an unsavory entertainment that makes profit out of our information and distraction from our daily life.
In addition, Social media lead us to get used to having fragment of our intention which lowers our capacity of concentration.
There are evidence of how social media could impact on people in psychological aspects by increasing rate of depression and anxiety.

How to control social media

If you are trying to confine yourself to have access to social networks during a day, you are not curing your issue, unfortunately. It seriously resembles the situation in which doctors prescribe painkillers for a person who suffer form backbone problems. Frankly speaking, using an anesthetic never heals you. I personally would rather right a wrong than kill the pain. So, if we need to control social media, we should look for the psychological issues that we are suffering from. Also, we should respect our schedule and chase our dreams perpetually and stay goal-oriented no matter how magnetic the social network platforms are.

22 thoughts on “Free English Webinar on Social Media for IELTS”