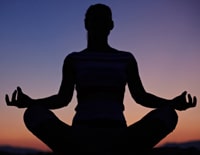 Watch the video podcast of this English class on Discord.

Join our free IELTS class on Discord by joining our Discord server.

There are thousands of studies that have shown mindfulness meditation can positively impact mental and physical health. Whether it’s by reducing stress, improving sleep, increasing focus, or improving relationships, research shows mindfulness works. While the research on mindfulness, especially digital mindfulness programs, is still growing, there is evidence to support the use of mindfulness training for many outcomes.

Last week, a study from UCLA found that long-term meditators had better-preserved brains than non-meditators as they aged. Participants who’d been meditating for an average of 20 years had more grey matter volume throughout the brain — although older meditators still had some volume loss compared to younger meditators, it wasn’t as pronounced as the non-meditators. “We expected rather small and distinct effects located in some of the regions that had previously been associated with meditating,” said study author Florian Kurth. “Instead, what we actually observed was a widespread effect of meditation that encompassed regions throughout the entire brain.”

Studies have shown that meditation improves self-image and self-worth. When we meditate, we get a clear picture of our mind and become aware of the thoughts that drive our emotions and actions at the moment.

A large-scale study found that regular meditation decreases the likelihood of developing depression and mood-related disorders (Jain, Walsh, Cahn, 2015). Besides some forms of meditative practices which also promoted positive thinking, as researchers stated, and could improve the overall emotional health of an individual.

Meditation might also be useful if you have a medical condition, especially one that may be worsened by stress.