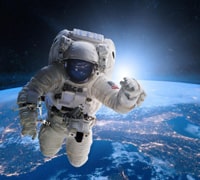 Listen to the podcast of this English conversation on space exploration:

Join our free English classes for IELTS and TOEFL on Discord every day.

Join our Discord server where we hold our online classes. You can also chat with hundreds of IELTS and TOEFL candidates, ask us your English questions and find English partners.

Use the interactive comment form below to leave your questions and comments about the current topic. Afterwards, we will discuss your opinions and questions in our class on Discord.

Space exploration is the use of astronomy and space technology to explore outer space. While the study of space is carried out mainly by astronomers with telescopes, its physical exploration though is conducted both by unmanned robotic space probes and human spaceflight.

Space exploration has often been used as a proxy competition for geopolitical rivalries such as the Cold War. The early era of space exploration was driven by a “Space Race” between the Soviet Union and the United States. The launch of the first human-made object to orbit Earth, the Soviet Union’s Sputnik 1, on 4 October 1957, and the first Moon landing by the American Apollo 11 mission on 20 July 1969 are often taken as landmarks for this initial period. The Soviet space program achieved many of the first milestones, including the first living being in orbit in 1957, the first human spaceflight (Yuri Gagarin aboard Vostok 1) in 1961, the first spacewalk (by Alexei Leonov) on 18 March 1965, the first automatic landing on another celestial body in 1966, and the launch of the first space station (Salyut 1) in 1971. However, the fact is that the first objects that were ever in space were the Nazi V-2 missiles in WWII, instead of what is commonly believed to be the first human object in space, Sputnik. After the first 20 years of exploration, focus shifted from one-off flights to renewable hardware, such as the Space Shuttle program, and from competition to cooperation as with the International Space Station (ISS).