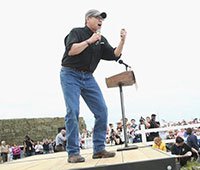 an angry speech or piece of writing which severely criticizes something or someone, invective, tirade, attack, denunciation, harangue, criticism, discourse, rant:

On the one hand, it is somewhat premature to begin to speak about the tone of the diatribe, since much still remains to be discussed. On the other hand, certain features need to be addressed that begin to push the discourse in a particular direction.

He launched into a long diatribe against the government’s policies.